Posted by AndyRobot on September 29, 2008 in Uncategorized

The first of three Presidential debates happened last Friday, and while you were all out having a life, my trusty sidekick/girlfriend and I settled in to watch.  She passed out about three minutes in, which should tell you something.  Seriously, you follow these guys enough, you know exactly what they’re going to say and how they’re going to say it.  McCain’s going to come across as experienced yet cranky.  Obama’s going to be intracable but pleasant.  McCain’s going to be too mean.  Obama’s going to be too nice.  And so on and so forth.

Suffice to say, the SNL sketch they did the next night wasn’t one of the better debate sketches.  Darrell Hammond’s McCain summed it up near the end, when he basically deivered a joke where the punch line was “you know what? I honeslty don’t care anymore.”  Fred Armisen’s doing his best with Obama, but there’s not a lot there to make fun of.  It’s not because he’s black, or “better than us mere mortals,” or anything like that – it’s because Obama, as the first Presidential candidate to come of age in a post-Watergate/SNL world, is self-conscious enough to avoid doing or saying anything really silly.  In this case, a not-particularly-succesful joke about how Obama wanted to give tax cuts to Tony Rezko elicited applause, simply because Armisen had finally found something to make fun of Obama about.

If they really want to do something with their “Barack Obama” character, they should throw him into a fish-out-of-water scenario, and see what happens.  The real life Obama caused some chuckles early on by bowling (poorly) and appearing on SNL as himself, making fun of his own straight-forward, straight-laced attitude.  Let’s see how “Barack Obama” reacts to a rodeo, or a strip club, or a Passover seder.

Another thing I noticed during the real debate that they could have made fun of was McCain’s constant barrage of half-truths about Obama, and Obama’s constant barrage of interrupting “no, no, no, JOHN, you – that’s not- no, that’s not true,” which caused McCain to talk louder, at first, and then drop out passive aggressively.  To me, that’s the obvious joke – McCain’s a big liar and Obama’s really eager to prove him wrong.

I don’t know – I’m not writing for SNL.  Whatever.

Posted by AndyRobot on September 29, 2008 in Uncategorized

prepared to be scared by internet video some more

Holy crap, you need to watch this.  How it makes you feel probably depends on your political persuasion.  If you’re a Democrat, it’ll make you homicidal.  If you’re a Republican, it’ll make you feel smug and all warm inside, and you’ll probably make that weird “laughing with your mouth closed” noise that Bill Kristol makes.  You know the one I’m talking about – it’s the noise you make when you’ve just smeared poop all over something, and someone’s about to touch it.

Posted by AndyRobot on September 27, 2008 in Uncategorized

ben bernanke needs your teeth for the federal reserve

Well, the entire economy of the planet collapsed into a big sweaty heap of shite last week, as I’m sure you’re aware.  I could go on and on about how interesting it is that giving health care to kids is socialism, but essentially nationalizing the finance industry is just good capitalism.  But I won’t, because others have.  Let’s just say that this makes things very interesting.

I think Lemon Demon, and Ryan Murphy and Jake Quilty-Dunn, summed it up best in their video “Ben Bernanke,” which appeared last May and seems eerily prescient now.

Okay, there’s nothing prescient about that at all.  But eerie?  Yes.

Posted by AndyRobot on September 24, 2008 in Uncategorized

Watched most of the Emmys last night.  Yay for Mad Men, my new favorite show, and 30 Rock, which would be if I had time to watch TV like the rest of you.  Tina Fey won two awards.  Don Rickles came on and was freaking hilarious.

Rest of the show: suuuuuuuuucked!

It was the 60th Emmy awards, which meant retrospectives and nonsense.  This included the cast of Laugh-In popping out of their trademark wall.  If this seems like a good idea, you obviously weren’t watching.  Seriously, it was like watching the Muppets smoke crack.  And not in a funny, online-video sort of way.

Joss Groban sung a medley of TV themes.  I can’t decide whether this was awesome, gay, awesomely gay, or what.

Posted by AndyRobot on September 22, 2008 in Uncategorized

We interrupt our regularly scheduled political self-immolation to bring you the Best Music Video of All Time Ever: Weezer’s video for “Buddy Holly.”

I bring this up because, holy crap, this is still a great video, and because it offers me the chance to make fun of stupid kids on YouTube.  The following comments are, unfortunately, real:

Yep, that’s what things were like in the olden times.  Ducktail hairdos, “the Twist”, drive-in internet cafes…

Thinking people of different races are funny is so totally racist.  Enjoying the humor of Richard Pryor is exactly like going to a Klan meeting.

Yes, M4DfingazJake, the forces of the universe have conspired to fuck with your head by putting a hit song in a video game with a lot of other hit songs.  Seriously, call Ghost Hunters.

luciargoni (2 weeks ago)
there is no black, asian, mexican or other race except﻿ caucasian in this video

llamamans (2 weeks ago)
Umm yea so you gonna make a deal about it when Nelly or other similar singers/rappers dont have white, asians, or mexicans in thier videos
bob44466 (2 weeks ago)
its﻿ meant to be stereo-typical 1950s America kkk n shit

Right.  I forgot.  The olden times were all about ducktail hairdos, the Twist, drive-in internet cafes, and white power.  Also, bowling.

Lemonsaplenty (2 weeks ago)
ok lets not get carried away,
but u kno who else is great
JESUS

GummehBearz (2 weeks ago)
Weezer rocks! 😀
This song is like, a year older than me. xD
Not like that matters. :O

This comment made me feel so old, I forgot how to use the internet. XP

This might sound weird, but I totally want to hang out with you now.
4 Comments

Posted by AndyRobot on September 17, 2008 in Uncategorized

Didja hear the one about how Sarah Palin, who’s supposed to be all anti-earmark and small-governmentish and stuff, requested millions of dollars from the federal government so that Alaskans could study the mating habits of crabs? 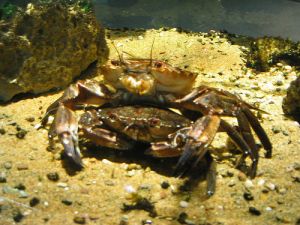 These crabs are doin' it.

Oh, man, oh man… I totally want to get a bunch of people in crab suits together, show up at some McCain/Palin event, and just start bumpin’ and grindin’ to Barry White.

Posted by AndyRobot on September 16, 2008 in Uncategorized

You know, I hope the world does end.  I hope they switch on that Hadron Collider and it creates a big ol’ black hole that swallows us up.  I’m so damn sick of people this morning I could spit.

Obama made a corny comment about “lipstick on a pig”, which is an old expression.  He was referring to the McCain campaign’s tendency to take old Bush administration policies that didn’t work and pretend like they’re going to work.  That’s the situation you normally say “lipstick on a pig” in.

However, some people think he was referring to Sarah Palin.  Because she wears lipstick.  And she mentioned lipstick in her speech.

Wow.  What a convincing reason to accuse the Senator from Illinois of calling a woman – nay, all women – pigs.  For shame, sir.

First of all, no.

Second of all, he was quoting Dick Cheney.

Third, you people are morons.   Here comes the black hole.

They say that art imitates life.  Some say life imitates art.   I say: when did life start imitating Bloom County?

Posted by AndyRobot on September 10, 2008 in Uncategorized

Cliff Stoll: this video has nothing to do with politics

I’m sorry about the last couple of weeks – some of you dig it when I get all political, some less so.  I know the whole process makes me angry and un-fun.  If you ever really want to make me un-fun, read me something that was written by somebody with blinders on, who can only see one point of view and who doesn’t realize that their argument makes no sense.   Especially if that person’s, well, mean. 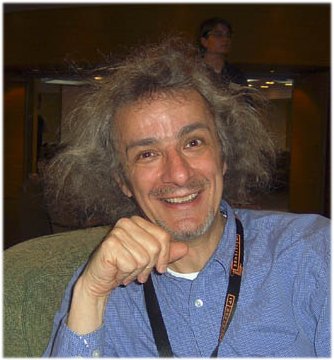 Cliff Stoll is not mean.  Cliff Stoll has nothing to do with politics.  Cliff Stoll barely has anything to do with this planet, except that his presence here makes things really, really interesting.  He’s an astronomer who brought down a KGB hacker in the 1980s.  He’s a computer geek who deeply misrusts computer culture.  He’s a stay-at-home dad who makes Klein bottles.  You know what a Klein bottle is?  It’s a one-sided 3D object.  Consider your mind blown wide open.

If you think mad scientist types are awesome (and I do: I was raised by an eco-warrior, a biblical archaeologist, and an Atari 800XL) you’ll love Mr. Stoll.  Here he is – possibly the most refreshing person you’ll ever hear speak on the subject of anything.  It’s a TED lecture he gave two years ago on, well, the universe, basically, and it’s great.

Posted by AndyRobot on September 8, 2008 in Uncategorized

The latest big, stupid kerfuffle is this flag thing.

Here’s a picture of several flags wrapped in garbage bags, backstage at Invesco Field.  According to the McCain campaign, those naughty, unpatriotic Democrats were going to throw Ol’ Glory away after waving them for their elitist terrorist boyfriend nominee, showing an utter disrespect for the Most Holy and Glorious Flag of George Washington, Ronald Reagan, and Jesus (I’m paraphrasing here).

The McCain campaign proceeded to get ahold of these flags, hand them to supporters at a rally in Colorado Springs, and say “those Democrats threw out our flag! Oh HO!”

Which is just silly, and I’ll tell you why after the cut.

END_OF_DOCUMENT_TOKEN_TO_BE_REPLACED

Posted by AndyRobot on September 7, 2008 in Uncategorized